Objects are the main building blocks in a project and can be used to build the project hierarchy. Task and Milestone are built-in objects that cannot be changed or removed. All other objects can be modified or new objects created to suit the projects your company is working on. 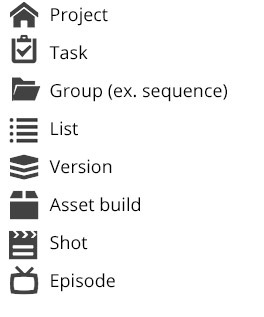 A visual effects project could include the following:

while a simple game project could have:

and a software project could have:

To use objects in a project they have to be added to the workflow schema used by that project.